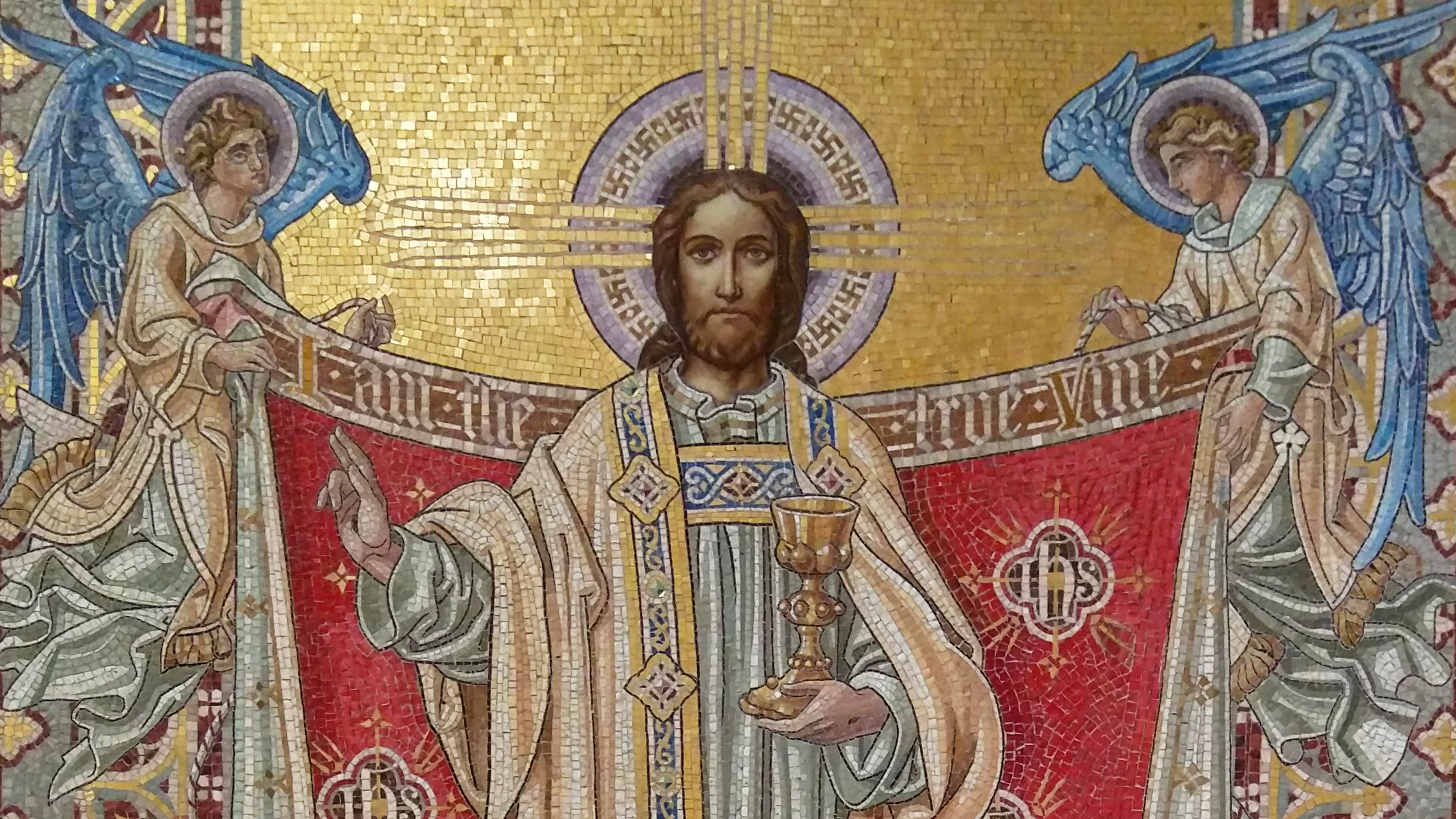 On January 1, 1891, Corpus Christi Church was consecrated. The magnificent church building was built for the wealthy community of Bolton Hill, then known as Bolton Depot. Its consecration was a major social and liturgical event that began at 6:30 a.m. and lasted more than 14 hours. Baltimore’s Cardinal James Gibbons presided, along with six bishops from across the country and all the clergy of Baltimore. The carriages of the wealthy wound in long lines up the hill.

Work on the church began in 1885. The parish had been founded in 1880, with the congregation meeting on the top floor of a school building across the street (near where the rectory is now). The rectory, across Lafayette Street, was built in 1894. The church was placed on the National Register of Historic Places in 1978. This was the first church in the United States to be named Corpus Christi, and it was the first church in Baltimore to be built entirely of granite. Corpus Christi was originally called the Jenkins Memorial Church, and was one of very few “memorial” Catholic churches in the United States dedicated to an individual or family. The Jenkins family was one of Maryland’s oldest families, prominent in business, philanthropy, church affairs, and the arts. The building’s origin began in 1882, when Louisa Carrell Jenkins, a few days before her death, called her five children together and asked them to erect a church in memory of their father, Thomas Courtney Jenkins, who had died the previous Christmas Eve. The children decided to make the church the most magnificent in Baltimore, and to dedicate it to both their parents. Thomas and Louisa are buried in a crypt below the St. Joseph chapel and several of their children are buried below the St. Thomas Aquinas chapel.

The style of the church is decorated Gothic, a style dating back to the 13th century. As with the original Gothic cathedrals of Europe, the ornate decoration is meant to both instruct and inspire. In the case of Corpus Christi, which means “Body of Christ” in Latin, the recurring themes throughout the church are wheat and wine. One can see these themes played out on the marble floor, the mosaics, the stained-glass windows, and the altars. Many of the mosaics and stained glass windows at Corpus Christi are considered some of the finest examples in the world. The Apse, for instance, contains five Florentine mosaics on glass depicting the life of Christ. The only other places where mosaics of this style and quality are found are at St. Mark’s Cathedral in Venice and at the Vatican. You are welcome to tour the church to learn more about its rich history and its fine works of art.

It seems remarkable that in 1884, when Patrick Charles Keely received the “Laetare Medal” for “Outstanding Service to the Catholic Church and Society” from the University of Notre Dame in Indiana, the New York Times reported that “Mr. Keely has already constructed 700 ecclesiastical structures!” 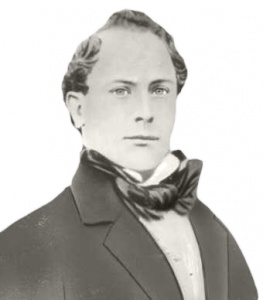 Patrick Charles Keely was born in Thurles, Ireland, in 1816, and immigrated to America in 1842. His father William Sr. and brother William Jr. worked on the building of St. Patrick’s College in Thurles. While not allowed to work as an architect under the Penal Laws imposed by England, the hired architect had been dismissed and William Sr. acted as superintendent of the construction of the college. Thus the Keely men gained great insight into a profession of architecture that would make them notable in Ireland, and great craftsmen in America.

The experience garnered by Patrick, from the work of his father and brother, would aid Patrick when he immigrated to America in 1842. Working on the enlargement of St. James Pro-Cathedral, in Brooklyn, NY, his work experience caught the eye of Fr. Sylvester Malone, who hired Keely to build his first church in America, Sts. Peter & Paul Church in Brooklyn. With the Catholic population of immigrants flooding the Atlantic coast, clergy of fledgling flocks would call upon Keely to design Catholic structures. Spreading construction into New Jersey, New York City, and Philadelphia would create demand for the services of this talented architect. Although Patrick had no formal architectural training, he was soon asked to erect cathedrals in Cleveland and Albany, which would eventually lead to the construction of more than 20 cathedrals, most still in use today.

Patrick Keely’s designs spread through America, flooding designs in New England, the South (St. Joseph in New Orleans), Canada (Church of the Gesu in Montreal), and the Midwest (St. Bernard, in Watertown, WI). When the St. Joseph Passionist Monastery Chapel opened and was dedicated, the Archbishop of New York called it “a gem of architecture.” More than likely, all this praise for the architectural work of Patrick Keely caught the eye of the Jenkins family when they wished to honor their father, which led to Patrick C. Keely designing “The Treasured Gem of Bolton Hill!” 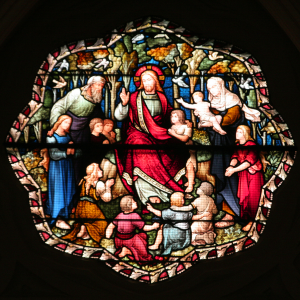 Although Corpus Christi Church was erected primarily as a memorial to Thomas Courtney Jenkins and his wife Louisa Carrell Jenkins, the church in a larger sense is a memorial to the Jenkins family in Maryland, who can trace their history back to the State’s beginnings. The association of the Jenkins family with the Catholic history of the State is symbolized in the mosaic over the door leading to the Lafayette Avenue exit of the church. This mosaic, which was put in place in 1896, shows Father Andrew White offering the first mass at St. Clement’s Island in St. Mary’s County on March 25, 1634.

Thomas Courtney Jenkins is one of the great-great grandsons of Thomas Jenkins, who, in 1669 or 1670, came to Maryland as a young man with his wife Ann Spalding. They lived in Charles County for nearly sixty years and their children married into the leading Catholic families of the province.

Thomas Jenkins’ youngest son, William, married Mary Courtney in 1718. William owned land in Charles, St. Mary’s, and Baltimore counties. They had six sons and two daughters. Three of his sons moved to Baltimore County, which was then still largely a wilderness. Among them was the second but youngest child, Michael Courtney Jenkins.

Michael settled at Long Green in 1757 on a 900-acre plantation bequeathed to him by his older brother Thomas who had died that year. He married Charity Ann Wheeler in 1861. Michael and Charity had ten children. The third child, William Jenkins, moved to Baltimore City in 1780 as an apprentice to a tanner.

It was with William Jenkins that the family fortune began to develop. After finishing his apprenticeship, he established his own successful leather business on Water Street. William’s first marriage was to Anne Hillen, who died soon after their first child was born in 1799. He re-married on June 2, 1801 to Ellen Willcox of Delaware County, Pennsylvania. Exactly nine months later their first son, Thomas Courtney Jenkins, was born.

Thomas Courtney Jenkins was born on March 19, 1802, the feast of St. Joseph. Upon completing his studies at Mount St. Mary’s College in Emmitsburg, Maryland, he joined his father in the leather business in Baltimore. In 1822, he was given an interest in the firm, but six years later he left to establish the “Poland and Jenkins” firm with Mr. Poland Adams and soon became a very successful business man and financier. In 1832, he became the director of the Mechanic’s Bank, a position he held for 49 years. For many years, he was also the director of the Savings Bank of Baltimore. He was one of the original organizers of the Parkersburg and Central Ohio Railroad, the Northern Central Railway, and the Atlantic Coast Line, and also organized the Merchants and Miners Transportation Company. In 1829, he married Louisa Carrell from Philadelphia.

Of Irish descent, Louisa Carrell was the youngest daughter of John Carrell (1758-1830) and Mary Judith Moore (1766-1817). She was the sister of George Aloysius Carrell (1803-1868), who later became the first bishop of Covington, Kentucky. Louisa probably met her future husband in Emmitsburg through her brother, who was also a student at Mount St. Mary’s College. Louisa attended Mother Seton’s School in the same town.

The couple resided for many years at 608 North Calvert Street, in what was then called Waterloo Row. In 1851, they moved to 721 St. Paul Street. Thomas and Louisa Jenkins were prominent and active members of the Catholic Church in Baltimore and its various causes. Thomas Jenkins was one of the first pew holders and oldest member of the Board of Trustees of the Baltimore Cathedral (The Basilica). He was an incorporator of St. Mary’s Orphan Asylum and St. Mary’s Industrial School for Boys. His house frequently hosted many of the prelates of the church, especially during their attendance at the councils held in Baltimore. He was an intimate friend of James Gibbons, archbishop of Baltimore and later Cardinal. In 1865, Thomas retired from business. He passed away on Christmas Eve in 1881. His wife died a year later.

Thomas and Louisa were both buried in the family vault in Bonnie Brae cemetery, but on December 12 their remains were transferred to the crypt in the St. Joseph Chapel in Corpus Christi-Jenkins Memorial Church, the church that was built by their five adult children.

The children of Thomas Courtney Jenkins and Louisa Carrell.

In all, the couple had 10 children, but three girls did not live until adulthood, and one boy died during the Civil War.